Bullmastiff Puppies at a Glance: 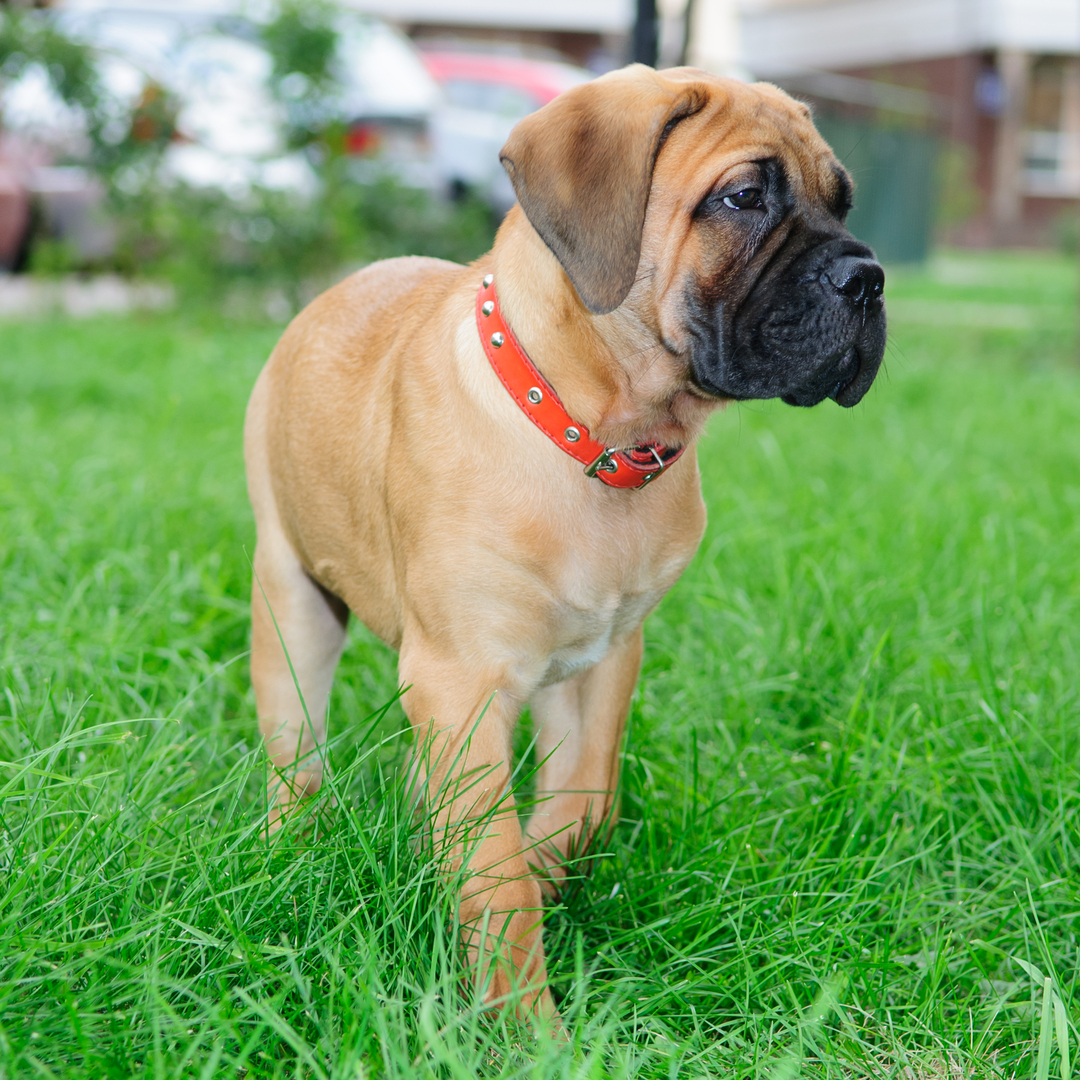 Being one of the largest breed, Bullmastiff puppies can easily be spotted from a mile away.  A Bullmastiff's size isn't the only noteworthy characteristic you'll notice. Their unique physical appearance comes from the breed originally mixed of 60% Mastiff and 40% Bulldog.

Bullmastiffs are strong, muscular dogs with a dense coat of short tan, brindle, or red fur. Their ears, muzzles, and area around their eyes are often black or deep brown. Their chests can be light tan or white.

This lovable breed is known for having a wrinkled head and faces with a short, square snout, indicative of a "bull" breed. Some Bullmastiff puppies are born with an under-bite, and they naturally have triangular ears.

The most distinct feature of a Bullmastiff is their size and shape. They have broad shoulders and chests and proportionately large heads. Their tails are long and thin, and they often look like they're smiling when they pant.

Bullmastiff puppies are playful, confident, and loving.  They have a great balance between wanting to please their owners and being independent. This makes early training vital for Bullmastiff puppies. They do well with routine and predictability.

As puppies, Bullmastiffs are quite playful and active. They tend to trip over their own feet and always be on the move. But as they mature, Bullmastiffs mellow down and become more serious. Many owners describe their Bullmastiffs as docile, watchful, and quiet.

Bullmastiffs are very sociable and enjoy spending time with people. They tend to get lonely if left alone for too long. They may even escape to go looking for their owners or make new friends!

Bullmastiffs were developed as guard dogs, so socialization from a young age is imperative for a friendly foundation. Puppy schooling or dog parks are wonderful ways to introduce Bullmastiff puppies to other dogs and people.

Early leash training is also essential. Once this dog is full-grown it can become impossible to maintain control if a Bullmastiff wasn't taught how to walk on a leash as a puppy.

Bullmastiffs are a working breed, so it's best to keep them stimulated with games and training. They tend to get lethargic and slip into bad habits, so training should extend from puppyhood into adulthood.

They are also quite intelligent, agile, and have excellent endurance which makes them great candidates for tracking and scent work. They are sensitive to heat, so they should be monitored if they are working/playing outdoors in summer or in humid climates.

They also tend to drool a lot so always have water nearby to keep them hydrated. 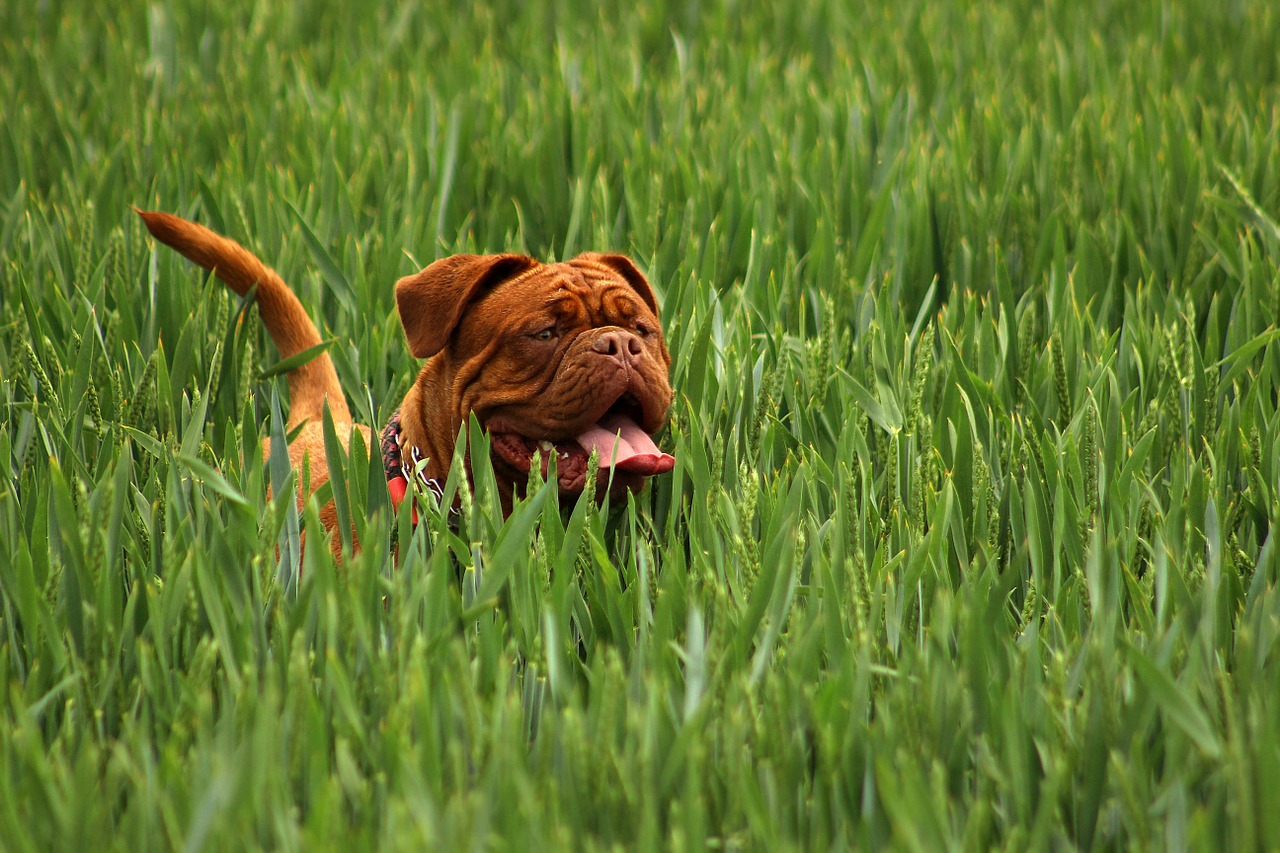 Many people are surprised to find the super peppy puppy they brought home grows into a couch potato. Bullmastiffs are known for their low energy levels as adult dogs. Some may be more active than others, but usually, a couple of 30mins walks per day and a game of fetch will satisfy a Bullmastiff’s need for exercise.

Bullmastiffs puppies should never be over-exercised. Being a large breed combine with rapid growth, can mean easy injury or developing joint related issues later on. Their short muzzles, also known as “brachycephaly" might make breathing difficult when overexerted.

With a short coat, light shedding is normal for Bullmastiffs. They can develop allergies, so note if there’s an increased loss of hair or excessive scratching. A balanced and nutritious diet can help keep a Bullmastiff’s coat healthy and shiny.

Mastiff puppies only require occasional baths and nail trims. They also need their ears cleaned, usually about twice per month. Teeth should be brushed regularly. 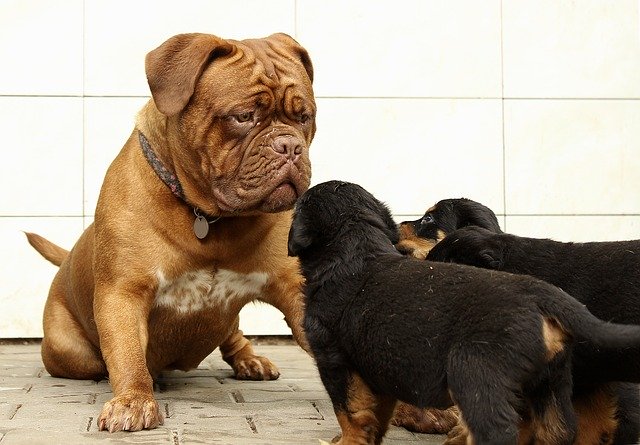 Being Part of the Family:

Bullmastiffs make terrific family dogs. For the most part, puppies enjoy playing with kids and adults are calm around children.

That said, it is not uncommon for adult Bullmastiff to knock children over due to their size so any play between a Bullmastiff and child should be supervised. Bullmastiff puppies grow very attached to their families and enjoy spending time just hanging out with the pack.

Because they were bred as guard dogs, Bullmastiffs tend to be quite protective of their families. This isn't a problem once a Bullmastiff puppy has been properly socialized.

Bullmastiffs tends to drool a lot. This can make cleaning up after them a bit of a chore if you don't know what you are getting into. The lovable nature of this breed makes it worthwhile though.

Bullmastiffs adjust well to their owner’s work schedule, and they don't mind being left home for an extended period of time. Due to their size, a backyard and larger home are ideal for this breed.